A Culinary Tour of Garden And Recipes

Let me take you on a culinary tour of my plot. I am happy with my selection of vegetables that are mostly tomatoes.  I like to make marinara sauce from scratch. In a pan of olive oil infused with garlic, add sliced tomatoes, throw in a basil leaf, salt and pepper, cook and simmer until the tomatoes turn into a thick sauce. You can strain the sauce, or just take the basil leaves out and keep the traces of tomato skins that add essential roughage to one’s diet. 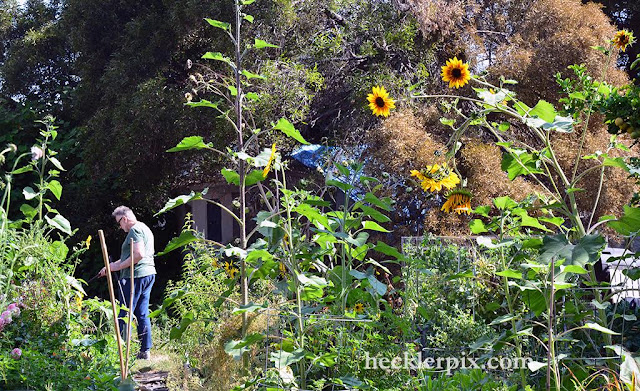 I hardly grow eggplants because I can never get the soil in top notch condition. But I’ve had a wonderful harvest of Japanese eggplants.  I grew up in the kitchen watching my Serbian mother cook for a family of five. Eggplant caviar was one of her signature dishes. She incorporated eggplants, green and red bell peppers and a couple of cloves of garlic.

First, you brush the eggplants and bell peppers with oil, salt and pepper. Put them on a cookie sheet into a 450 degree oven until the skin of the vegetables blackens.

In the meantime make a marinade of fresh squeezed lemon, sprigs of rosemary, dill, thyme, olive oil, sea salt and black pepper. When the eggplant, bell peppers and garlic are done, transport them into a large bowl anplace a moist towel over them and let them rest until the skins are easily removed. Squeeze out the roasted garlic and incorporate it into the marinade.

Chop up all of the roasted vegetables and incorporate the marinade and refrigerate for a couple of hours.

Then I look for radishes housed between the rock paths.  I pick them and slice them in half.  I lather them in butter and salt.  It's very Russian.

Flowers that will bloom in a variety of bold primary colors. Some will keep the birds away but most of them are for cutting to put on my little corner altar of  a blend of icons and Chinese deities. A visual summation of my long term relationship. And finally my garden wouldn't be complete without
sunflowers.

So now I would love for you to look through your garden and share your recipes.
Labels: Tales from the Garden 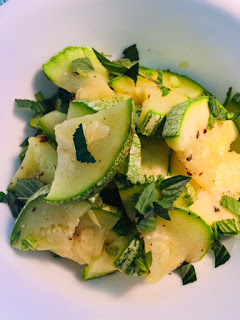 Found in 2009, our community garden is located in East Hollywood by near iconic 101 Freeway and Fountain Avenue. Officially in Hollywood District 13, our mission is to provide safe green space to our community members through inclusion of all ethnic and economic backgrounds. Currently we have over 100 gardeners working on 65 plots to plant, grow and provide fresh fruits and vegetables to themselves and their families. In doing so, we strive to provide an open environment for the benefit of our community and environment.
Regular contributing members of this Website are Alex Alferov, Dan Fujiwara, and Laura Guzman- all community residents of Hollywood District 13. Alex is one of the garden's founding members who resides near the garden in his art studio. Dan is our Master Gardener, who also professionally teaches gardening. He holds many workshops in-and-out of the garden, where he offers information, advises and tips to assist all levels of gardeners. Laura is a professional chef who teaches cooking to children to promote healthy eating habits. She plays a vital role in bridging various cultures in the community garden.